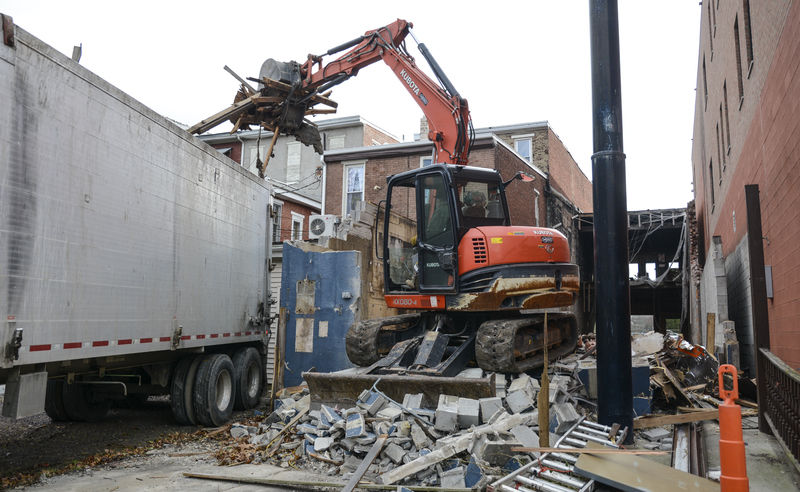 he demolition of a fire-damaged downtown restaurant should be completed by the end of this week.

An excavator was being used to raze the back of BJ’s Steak and Rib House, at 295 Mill St., Monday.

The excavator was also loading materials into a tractor-trailer.

John Rothrock, the rig driver, said the debris will be taken to the landfill at McElhattan. He expected the job will involve two loads of 20 tons per load.

Meanwhile, Richard Steinbacher and his son Mark Steinbacher, of R.L. Steinbacher Excavating and Demolition of Williamsport, were on the roof removing it by hand. The excavator is collecting the roof materials.

“It’s pretty old and in pretty bad shape,” Mark said of the two-story building heavily damaged by fire on Easter Sunday in 2014.

Rothrock said he expected them to remove most of the building by hand for safety reasons, considering buildings on each side of the structure.

The fence was installed around the front along Mill Street for safety precautions, she said.

BJ’s owner Bob Kirkpatrick previously said he hoped to sell the lot after the building is demolished. He said he was still looking at relocating the restaurant to a building he could rent on Mill Street.